Beneath the City of Lights lies 200 miles of 13th Century tunnels. Tunnels that once bustled with activity from miners extracting limestone blocks; blocks used to build the major European hub 60 feet above, Paris. These tunnels sat empty into the 1700’s, but toward the end of the century that would change. These same Tunnels today are one of the most visited tourist sites in Paris, The Catacombs.

By the time the 17th century was closing, Paris had a quickly compounding problem. The European hub had become highly populated very rapidly. Larger populations inherently come with a higher quantity of deaths and need for burial.  For centuries, the traditional urban burial would take place in the  churchyard. However, after centuries of burials, placing thousands of bodies in these landlocked churchyards; there was nowhere else to go except vertical. Historical descriptions depict some church yards growing by 20 feet vertically against the outside of the church. By the 1760’s it had become clear that something with burials had to change.

In 1763, the first step was taken to change how burials were handled. Louis XV declared no burials were to be allowed within the city limits of Paris. This prevented the problem from growing, but the existing situation had gone too far.

In the Spring of 1780, a prolonged rainy season caused a horrific event at Les Innocents. Les Innocents was a 4th century burial ground active for more than 10 decades. It is estimated that the grounds were the final resting place of an estimated 6 million people. During an extensive spring rain, a wall surrounding the burial grounds collapse, spilling remains onto neighboring property. This was the last straw, officials were forced to develop a solution to this horrific problem. Over the next several years’ officials sought to find a solution. In 1786 With no other viable options, steps were taken to relocate all bodies from the burial grounds in Paris, to the limestone tunnels under the city. An estimated 6-7 million unknown skeletal remains and bodies were moved to what is now known as The Catacombs,

Today only a small portion of the tunnels are open to the public, but even in that small percentage of the catacombs you can grasp the magnitude of the project that took place. 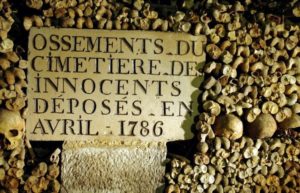 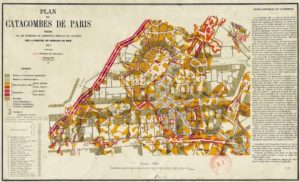